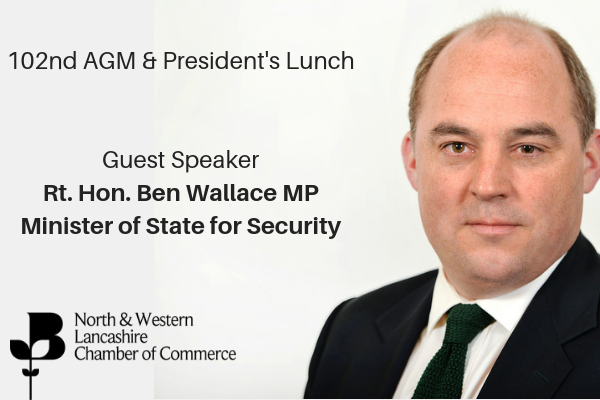 Businesses are invited to join us for the NWL Chamber’s President’s Lunch which will immediately follow the 102nd AGM of the Chamber.

We are delighted to confirm that our guest speaker will the Rt. Hon. Ben Wallace MP, Minister of State for Security and Member of Parliament for Wyre & Preston North.

Ben first entered politics as a Member of the Scottish Parliament in 1999. Following a move to Lancashire, he was elected to the UK House of Parliament in 2005. In 2010 Ben was elected as MP for the newly-created constituency of Wyre and Preston North. He has held a number of posts both in opposition and government, including Shadow Minister for Scotland and Parliamentary Private Secretary to The Rt Hon Kenneth Clarke CH QC MP, at the Ministry of Justice and Cabinet Office.

In July 2014, Ben Wallace was appointed as a government whip. He previously served as Parliamentary Under Secretary of State at the Northern Ireland Office from May 2015 until July 2016.

In 2008, he was awarded ‘Campaigner of the Year’ by The Spectator after leading calls for improved transparency and the reform of parliamentary expenses.

The AGM will take place prior to the lunch at 11.40am, members of the Chamber are invited to attend/vote.

To reserve your place, please complete the booking form and return to chamberevents@lancschamber.co.uk

Event T&Cs can be found HERE

Learn something new and improve your wellbeing with free @LancsLearning courses that are open to all employees who… https://t.co/Uo0UoVhvj8

RT @HMGNorth: The SME Brexit Support Fund is open for applications. Small and medium-sized businesses can apply for grants of up to £2,000…

© 2019 North & Western Lancashire Chamber of Commerce
Registered in England, No: 145454
Made in Freshfield
We use cookies to ensure that we give you the best experience on our website. If you continue to use this site we will assume that you are happy with it Find out more.