A future UK-EU trade deal must minimise barriers to trade says the British Chambers of Commerce, as it releases the results of its survey, in partnership with DHL, which finds UK businesses regard Europe as their primary trading partner for the coming years.

According to the findings, UK businesses foresee the most significant barriers to trading with foreign markets as tariffs (46%), customs procedures (39%) and local regulations (20%). The results also show exporters’ strategies over the next three years will primarily be influenced by increased demand from overseas buyers (48%), exchange rates (36%) and the UK’s future withdrawal from the EU (35%).

Businesses looking to import say they will primarily be influenced by the lack of suppliers in the UK (43%), followed by exchange rates (41%), and it being cheaper to import than source in the UK or produce within their business (33%).

The results of the survey underline the importance of the UK and EU reaching a business-friendly trade agreement that minimises costs and trade barriers. Europe will not only remain an important market for UK businesses to sell to, but with minimal evidence that UK businesses can substitute domestic inputs for imports in the short term, access to the European market will be crucial for firms to source components.

“Europe is the UK’s largest trading partner, so it will come as no surprise that businesses regard access to European markets and products as fundamental to their medium-term trading strategies. Now that negotiations on the future UK-EU relationship are set to begin, businesses need clarity on the practicalities of the future trading relationship between the UK and EU without delay. 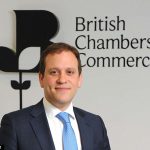 “High tariffs, cumbersome customs procedures, as well as conflicting regulatory requirements can deter firms from trading overseas – so a future agreement between the UK and the EU must minimise barriers and costs, to allow firms on both sides of the Channel to continue trading as freely as possible.

“The devaluation in sterling seen over the past 18 months has been a double-edged sword, providing a welcome boost for some exporters, but a drag on many other firms, who report higher costs for their inputs and components. While UK firms would like to be able to source inputs on the domestic market, our evidence suggests that swapping imports for domestic supplies isn’t presently an option for many. If businesses can’t find or afford to source their supplies domestically, easy and quick access to foreign markets is crucial. Both the UK government and EU Commission must work together in the new year to move towards a frictionless trade deal that works for both British and European businesses.”

RT @Cllr_Mike_Green: Wishing all the finalists the best of luck for this evening's #Bibas2021 awards. You can all be proud of your achievem…

RT @BIBAs2021: * WANT TO COME TO THE BIBAs? * We have a table of ten available tonight, for free (a small donation to our BIBAs foundation…