The North & Western Lancashire Chamber of Commerce switches its attention from rugby union to football on Friday night as its centenary year celebrations continue.

The Lancashire derby, which is being televised live on Sky Sports, is one where both sides need three points for different reasons.

North End are seeking to finish in the top half of English football’s second tier while, in contrast, their visitors are bidding to return to the Barclays Premier League at the first time of asking.

Chamber Chief Executive, Babs Murphy, said: “We couldn’t be happier to be staging our latest celebration event at Deepdale.

“North End are based close to our office in Fulwood and, like ourselves, have an anniversary of their own approaching with 2018 marking 140 years since their first football match.

“Our previous match sponsorship packages with other clubs this season have seen victories for both local sides so, hopefully, we can complete our hat-trick!” 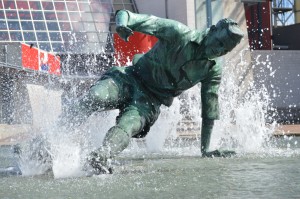 The Chamber’s match sponsorship arrangement follows on from similar packages at Fylde Rugby and Preston Grasshoppers earlier this year.

Their final match sponsorship deal comes on April 30 when it sponsors Blackpool’s Sky Bet League One game against Wigan Athletic.

Among the Chamber’s guests on Friday will be representatives from both of the organisation’s centenary sponsors, RBS and Moore and Smalley.

“Preston North End are one of English football’s iconic names, rich in history and associated with some of the sport’s biggest names,” said Jon Pinder from Moore and Smalley.

“Derbies always have a special atmosphere but there always seems to be a greater edge when matches are played under lights.”

“We have a foot in both camps considering we have premises in both Preston and Burnley,” admitted Stephen Ford from RBS.

“As a result, we wish both teams the best of luck for Friday night and hope both teams achieve their desired ambitions at the end of this season.”

Among the other centenary celebration events to be staged by the Chamber this year are a centenary black tie business dinner in May, Armed Forces Day a month later and the BIBAs in September.

RT @LancashireLsip: It's official: we're taking LSIP on a tour of Lancashire with our week-long series of roadshow events. You'll be able t…

RT @LancashireLsip: This is the final day to take advantage of this 'once in a generation opportunity' to have your say and shape the Lanca…

RT @BIBAs2022: The BIBAs are a celebration of some of the most exciting companies and entrepreneurs based in Lancashire. If you're ready t…